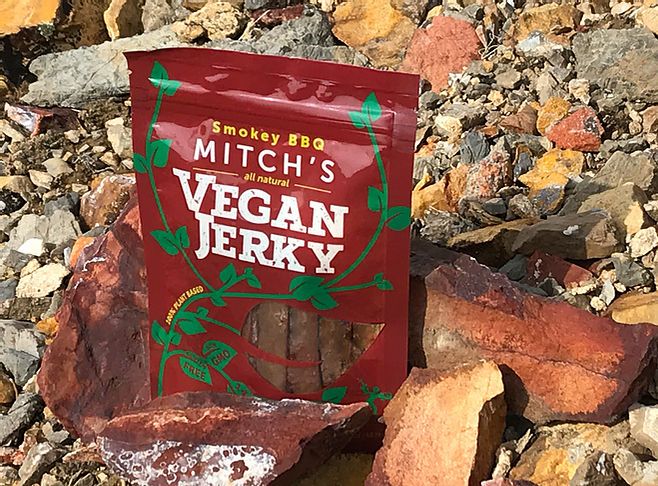 You know what they say, " Necessity is the mother of invention" and that's what led me to create Mitch's Vegan Jerky.  Being a vegan myself,  I was hard pressed to find a good vegan jerky so I set out to make my own.

It took quite some time and a lot of  batches later until I finally came up with something I liked. Originally, I was just making it for myself and just making the Cracked Pepper. Then a few years back I took some of my jerky to Burning Man and passed some out. The response I got was mind blowing!  Everyone (including meat eaters) was asking me where they could get some back in the real world. That's when I decided to bring it to the real world.

We found a kitchen here in Gardnerville, Nevada owned by Sal and Val Gray who also  own Italian Hearts Pasta Sauces.  They made it possible for us to make our jerky in a commercial kitchen. My wife and I developed the BBQ and Teriyaki flavors to add to the lineup. All of our ingredients are Gluten Free, Non GMO and/or organic. Our Pepper, BBQ and Teriyaki marinades are made from scratch so they're fresh every batch.

Well, that's my story and I'm sticking to it.  I hope you'll enjoy our vegan jerky as much as we do.